The Silver Lining, Or…

Learning self love in a world of surprises, and re-inventing our social and economic future 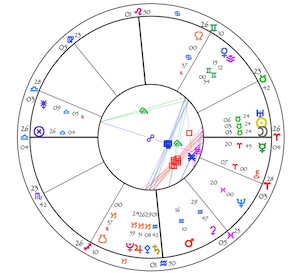 It was difficult choosing a simple title for this month’s entry. Not due to complexity, but how do I communicate the extreme and obvious changes that we are all going thru, with the appropriate amount of compassion mixed with the awareness of the total annihilation of what has been normal.

This is exemplified in the New Moon this month. We are new into Taurus, the sign most connected with the Earth and her resources, with physical body, and also sensuality, touch, and “bling”, body ornaments and beauty. So “normally”, this would be a time to expect the Rites of Spring and the awakening into full flower where the physical meets the social. Yet there is no normal now, as the worldwide whirlwind deck is being reshuffled, and we anticipate the hand that may be dealt.

This month, the Lunar cycle begins with Sun and Moon in Taurus also conjuncting Uranus and squaring Saturn. Some of the interpretation for this is very predictable and straightforward.

Expect unexpected changes in your physical and financial situation, not a good time for business as usual, and a time for new bold and extreme choices.

Saturn has just moved into Aquarius in end of March, and will remain there (besides Retrograding back into Capricorn 7/1- mid December) for two and a half years. Notably, the other two times in my life this has occurred were in the early 1960’s (Beatles, Astronauts, Civil Rights, etc) and early 1990’s (numerous social, spiritual, and political changes). Saturn in Aquarius is about embracing new ways of going about business, government, and social choices and boundaries, with something unexpected fueling the change. Saturn Retrograding back into Capricorn is a re-working and the other shoe dropping, perhaps involving a backlash.

Uranus has been moving thru Taurus for a couple of years, but is really showing His rebellious and unexpected hand just in the last few months, certainly since the conjunxion with Venus in Mid-March as previously noted.

Under Uranian aspex such as these, things do not go logically or as planned. Seeing oil prices drift into negative numbers and seeing Congress and the Executive branch universally agree on something, especially spending money, is also unexpected. How many of us foresaw this? (I foresaw something major, but wasn’t sure of what form it would take).

The conjunxion with the Sun and Moon indicates that the Earth, physical plane, and our resources are all of extreme importance now, but creativity is a path to success.

I know that my avocation implies seeing into the future and giving the best advice possible. People would like me to predict a date, yet these are not pre-decided. So people naturally want to know “when it is all going to end?” That is a central question, but the wrong one. For one thing, when giving birth, we don’t ask when it will end but what will be birthed.

We are dreaming this world together, regardless of the awareness of this, and what we are moving toward is both unanticipated and not fully envisioned yet.

Fate is not pre-decided, but tendencies are. The culture that we have been living in is literally dying. It won’t go back. Yet going forward is only scary in that it is unknown. Uranus is also telling us to use these bizarre times to take strong creative steps toward building something new, not fixing the old.

Add to the mix, Mercury will be dancing thru Taurus and various aspex in the next two weeks, and our group networking does become a strong avenue for these changes- supporting each other, stimulating new ideas and co-creativity, revisioning and retooling for the future. Healing the planet and our selves, taking an inner look and clearing out what no longer serves. Perhaps that includes the daily race toward the maintaining of a very consumptive lifestyle that has been unsustainable for longer than we think.

Good thing there is the Internet and Zoom, right? Well, that is a form of logical reliance that is never not guaranteed as the overwhelm accelerates.

So, contemplate just for a moment or more, what would happen if the electronic Wi-Fi grid also went down. What would you do, how would you communicate, how to connect? I ask this question because it seems to be the most reliable thing in these unreliable times. Yet this is a vulnerability, and it seems to be the time to be aware of all of our co-dependencies, and to anticipate the most extreme possibilities. Not just the negative ones, but also the serendipities such as clearer skies and return of nature to humyn habitats like cities. Logic is less reliable now than the unpredictable.

Practice grid independence at least one day a week. Turn it ALL off, including your router, when not actively using it. (I have personally only got Wi-Fi a month ago and we are amazed at the brain scrambling that goes on when it is on!) How can you possibly think clearly and not be influenced by outer forces when you are always swimming in it?

It is a challenge for me to address all of the Astrological influences at this time, there are so many. Most of them are obvious like the above. Then there are the upcoming influences which we are about to navigate, which includes several Retrogrades coming up. Venus, Saturn, and Jupiter beginning in mid May.

Venus in Trine with Mars

Most notably, while Venus is in Trine with Mars all of April, stimulating social FOMO and urging us all to stay connected, Venus will Retrograde in Gemini 5/13- 7/1. Typically, what I would say about this includes a usual economic downturn, especially for touch oriented livelihoods like massage, also the arts, music and performance, social life, jewelry, concerts, etc. So, yes, it’s real and goes on for while. I would say that the 7/1 date, which re-occurs, will be a stabilization point for Summer, but this meaning changes for each individual and location.

Venus and the other Retrogrades deserve more attention, which I will give in about two weeks. I have learned that to say all that can be can be overwhelming, so…later.

For the next two weeks

Don’t let the gloom cloud rain on your creativity! Now is not the time to be distracted, waiting for a system that you never quite had faith in anyway to rescue all of us. These complex Uranian aspex give us a rare opportunity to reboot our lives. This is not a matter of getting back on board with the way things have been.

All of this surprising and challenging universal purgatory is also the incubation time for something new. What is that for you? It is time to explore that concept- take your time, you probably have alot of it. But do not let this slide by while you are unconsciously surfing the net out of boredom. There is nothing you need to wait for, the bus is here- where do you want to take it?

Western civilization as we knew it has died, and is now being resurrected thru our creativity to start a new life. We will be remembering now later.

The key now- not the wildly unreliable choices of the past, not the giant group gatherings that we have come to love and depend on to reaffirm our selves, tribe, and communities, not the dependability of job or paycheck.

I know that you may be thinking that this is from someone who has their head in the stars and never had to worry about Earth plane and rational living. This has not been my case, having built a nature sanxuary for healing from the ground up over multiple decades, anticipating catastrophic events in my lifetime- some of which are yet to come. Personally, I am balancing my stellar essence with gardening and fluffing up elemental shrines, building, fixing, and music.

Self love gives us a rare opportunity to birth a new world. Co create with joy in the possibilities. Now that other distraxions are going away, how do you want to paint your masterpiece? Look for the clues in unseen places within your selves.

This is a free service provided for greater general clarity regarding the bigger picture. For a professional gaze into your own picture, contact Mark for a reading at astrowizardry@gmail.com  or 541-964-5341.

This site uses Akismet to reduce spam. Learn how your comment data is processed.